What a 10 mph car accident does to the neck?


Pain after a car accident can be very strange and confusing. Take a look at these examples and tell me if this reminds you of a situation that you or someone you know.

Person A: Healthy and fit 37-year-old man in a car and gets hit at 45 mph+. The impact drives his car into the car in front causing extensive damage.

Person B: Healthy and fit 29-year old woman. Sitting in line in a parking lot when another car runs into the back of her at 10 mph or less. Minimal damage to the car and wore a seat belt.

Which one do you think had a worse whiplash injury and had pain immediately and which do you think just had soreness that they wanted to get checked out?

Both had substantial biomechanical changes on their x-ray and MRI, but only one had a significant amount of pain immediately after the incident.

If you guessed that Person B with the parking lot bumper tap had the most pain, then you win! Congratulations!

The Deceptive Nature of Pain

Pain is one of medicine’s greatest tricksters. To this day, researchers and scientists don’t have a strong grasp on the nature pain disorders.

Why is it tricky? Because the pain someone feels isn’t necessarily related to the amount of damage in the body. Patients with fibromyalgia have crippling pain despite not having any visible damage to their bodies.
Pain is the most important factor to a patient, but it can be the most deceptive factor to a clinician. When it comes to taking care of people after an accident, we have to measure a patient’s function regardless of their pain status.

What Happens to the Neck After an Accident?

Insurance companies will only consider it an accident-related whiplash injury if you see a doctor within 14 days of the accident. So if you have no pain after the accident or the pain wasn’t bad enough to drive you to a physician until day 15, then you didn’t have a whiplash (I know how silly it sounds).

But going back to the previous example, we know that both Patients A and B had biomechanical flaws as a result from trauma to the spine. Despite the fact that there were 2 very different accidents and 2 different pain statuses, there are similarities in what can happen to the neck even after the smallest collisions. Take a look at the video below which simulates an accident less than 10 mph.

What Happens to the Neck in an Accident?

After watching the video, you can get the impression that a collision at just 5-7 mph causes rapid movement of the head and neck.

Despite the fact that your body is encased by a 2 ton metal box, it’s easy to see that even though the vehicle stops moving, there is still a transfer of energy into the body. When you’re wearing your seat belt, it causes a rapid deceleration of your body, but your head will continue to move forward and backward very rapidly.


In fact, a large enough force to the neck can actually produce a concussion even if there’s not direct contact to the head! These accidents would need somewhere around 90 G’s of force to the head.

While that would cease to be a small accident, the smaller 10 mph accidents can produce 3-5 G’s of force which is enough to damage the tissues of the neck. The way your head accelerates and decelerates can put 3-6 G’s of force into the cervical spine. This force gets transferred into the ligaments, muscles, discs, and joints of the neck more than any other piece of anatomy.

While the body can tolerate large amounts of force in brief periods, a large amount of force applied to a small region of anatomy as seen in a car accident can damage the tissues of the neck. 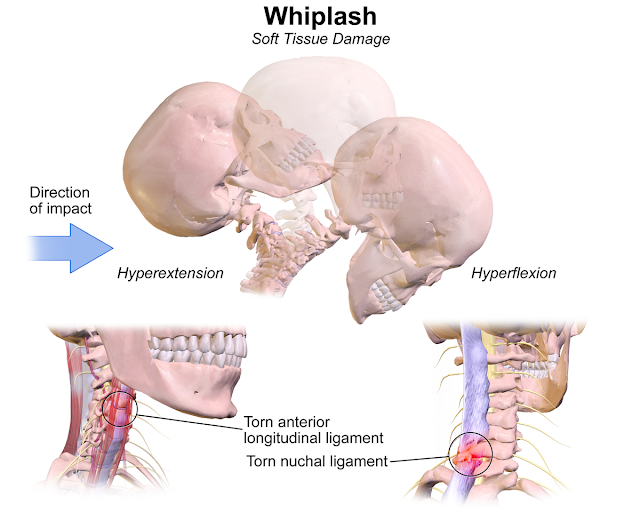 Ligaments are like the rubber bands of the spine. They can be stretched, but once they stretch too far, they can’t go back to normal again. As ligaments are damaged, scar tissue is used as a patch, but it’s not as functional as the stuff you were built with.

Just like when you sprained your ankle as a kid and that ankle never worked the same, damage to ligaments of your neck can happen the same way. Fortunately, true sprains of the neck take a lot of force and don’t happen with most accidents.

When muscle works beyond its capacity, or gets stretched beyond its end range, it forms small tears within the muscle belly. That’s why there’s no consensus as to whether you’re better off knowing about a coming accident and bracing, or if you’re better off being surprised.

Either way, damage to the muscle tissue can happen depending on the nature of the collision.


Muscle strains can be painful, but they can and do heal with time. Strain to muscle tissue is one of the most common sources of pain from whiplash injuries and resolve well with chiropractic and exercise.

Accidents are one of the most common ways that people under 30 can suffer herniated discs in the spine. When the force of an accident overcomes the resistance of the disc material, small tears in the disc can result in the inner fluid spilling into the spinal canal.

Sometimes this results in a pinched nerve, but most of the time it does not. A disc problem doesn’t have to be a big problem. Many people have disc damage and have no idea because it’s not symptomatic.

The muscles, ligaments, discs, and nerves of the neck help dictate the Structural Positioning of the spine. The force of an accident can deform one or all of these tissues leading to abnormal positioning of the head and neck.

This leads to abnormal neurological input to the brain and what manifests as poor posture (slouching, head tilt, antalgic lean). While poor posture is not the problem that needs to be treated, it’s an objective sign of a nervous system is operating at less than its full capacity.

Remember That It’s Not About Pain

Remember at the beginning of the article we talked about how pain can be deceptive. The reason I wanted to point that out is because you can experience damage to all of the above structures and not feel an immediate onset of pain. Pain is just tricky like that.

Whether you feel immediate pain or not, your neck should always be evaluated even after minor accidents because it gives the earliest and best opportunity to correct a silent problem.