What is Scoliosis? Should I be Worried?

As school starts around the country, many parents have concerns about backpacks and scoliosis screenings. What’s the truth?

As I speak to more and more patients, I’ve come to a realization that there is quite a bit of confusion about what scoliosis is, and how it can affect your child’s health. Many people remember going into the school nurse’s office every so often and get a scoliosis test where they bend down from their waste and touch their toes, as shown below. 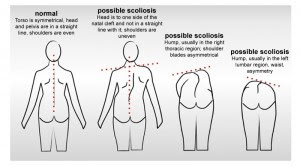 The most common screening test for scoliosis.

But what is scoliosis? Scoliosis involves a curved deformity in the spine. Now here’s where it gets funky. There are good curves and bad curves in the spine. When you look at someone from the side, the spine normally has 3 curves that curve to the front, back, and front again. These curves provide strength and stability to the spine in gravity. A scoliotic curve is seen from the front or back, and may indicate a structural abnormality or congenital deformity. 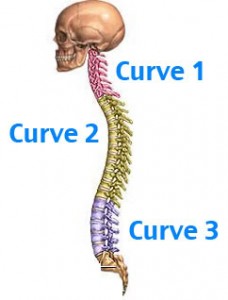 Good curves are visible if you look at someone from the side. 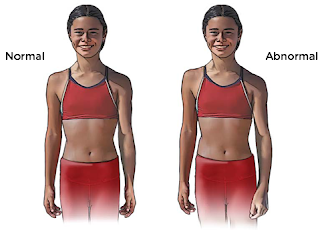 When you look at someone from the front or back, curves in the spine are a bad sign and may indicate the presence of scoliosis.

Many people can have a scoliosis and never feel any effects or symptoms from it.  Others may experience more common symptoms like back pain, neck/shoulder tension and posture/cosmetic problems. In rare cases, the curvature can become large enough (50 degrees or more), that it can compress the chest cavity causing respiratory and cardiac problems, and become a surgical issue.


Scoliosis comes in 2 main forms. There are is a functional scoliosis which is typically named idiopathic scoliosis, and there is a scoliosis called structural/anatomical scoliosis.
The real question is, should you be worried?

The truth is, if you’re just worried about pain, then probably not. Many times, scoliosis is asymptomatic, especially in children. In fact, most people will probably go through their childhood with no knowledge that it is even there. For the category of idiopathic scoliosis, it is often the secondary result of a structural shift in one or more bones in the spine.
A curve is usually not described as a scoliosis until it reaches the 10 degree mark. Most people are concerned when the curvature surpasses 20 degrees, as that’s when bracing becomes a common recommendation, and cosmetic concerns become more obvious (postural problems, protruding shoulder blade, etc). When the curve grows 40 degrees, surgery starts to become a real option for treatment.

The key is catching these curves early. Scoliosis is most commonly found in girls during adolescence, which is a great window of opportunity for structural correction, no matter how small the curve may be. Just like how a bent frame of a car can create suspension problems and tire wear/tear, a bent spine can increase the damage the spine experiences throughout life. I’ve seen x-rays of people well into their 40’s and 50’s who have never experienced spine pain, but will show a scoliotic spine with disc degeneration and bone spurs in the exact pattern that the structural alignment would dictate.

As the spine shows early wear and tear, the nerves can get damaged and cause secondary conditions as well as changes into the muscles, ligaments, and even the vital organs of the body can start to show.

As a worried parent, what can you do? Here are a few tips:
Posted by Dr. John Conflitti at 9:00 AM